Scala de Faro
Chania, Crete
HISTORICAL DATA The history of the building probably begins in the 15th-16th century, when it was built by the Venetians. Based on the material and the way of construction, as well as the historical narratives, we assume that in the first period of Venetian domination there was a two-storey building with the vaults of carved poros on the ground floor and the "Piano Nobile", the floor of the Venetian nobility above. The monumental scale of the northern façade is the most characteristic element of the building and proves its original Venetian origin. The ornate stone arched staircase is a fortified monument and is orally ornate later with herbal decoration and with the built-in Muslim fountain laying low inside its arc. After the city of Chania was delivered to the Turks in 1645, the building displayed different interventions.

From the narrations of the Tournefort traveler in 1717 ", the building seemed to follow in structure the typical home of the time. The house had two floors with a cellar and stables on the ground floor, walls of chiseled stones in the first, tattered walls in the second one and an open-planted terrace with flowers and climbing plants. This is also shown in the construction of the dividing south wall of the 2nd floor revealed during the restoration of the building from old contracts, we know that in 1890 there was a descendant of the Softazade family, a distinguished Turkish-Cretan family.

In the last 118 years, the building, as a chameleon, has constantly changed its appearance and spaces, expressing its needs and times. In 1932, Antonakakis, a great businessman of the time, took it from an auction, rebuilt it and started operating it, one of the first hotels in the city in 1934 under the name "MINERVA". After 36 years of operation as a hotel, it closed in 1970 and was used as the residence of Mrs. Anthoula Antonakaki, a special person in the city of Chania. In this listed building located in the heart of the Venetian harbor, guests can enjoy the excellent views of the sea, the old Venetian harbor, and the city, with all the modern amenities of a traveler.

It consists of 9 unique rooms and suites, arranged on 3 floors in the north and south, overlooking either the sea or the picturesque narrow streets of the old town and the mountains. Each floor has its own distinct features, referring to the elements of construction and the chronological phase that was created (Venetian, Ottoman, and Modern Greek periods), elements repeated in decorative motifs. The spaces were designed with the aim of following the basic architectural elements of the building and reusing original elements, shapes, and materials such as wooden paneling ceilings, wooden floors, classic doors, and stones. The materials used in the construction, such as ecological and biological insulating and mineral paints, are friendly to users and the environment there is also a possibility of combining rooms to meet the varying needs of numerous travellers, as well as exclusive use of the rooftop floor. 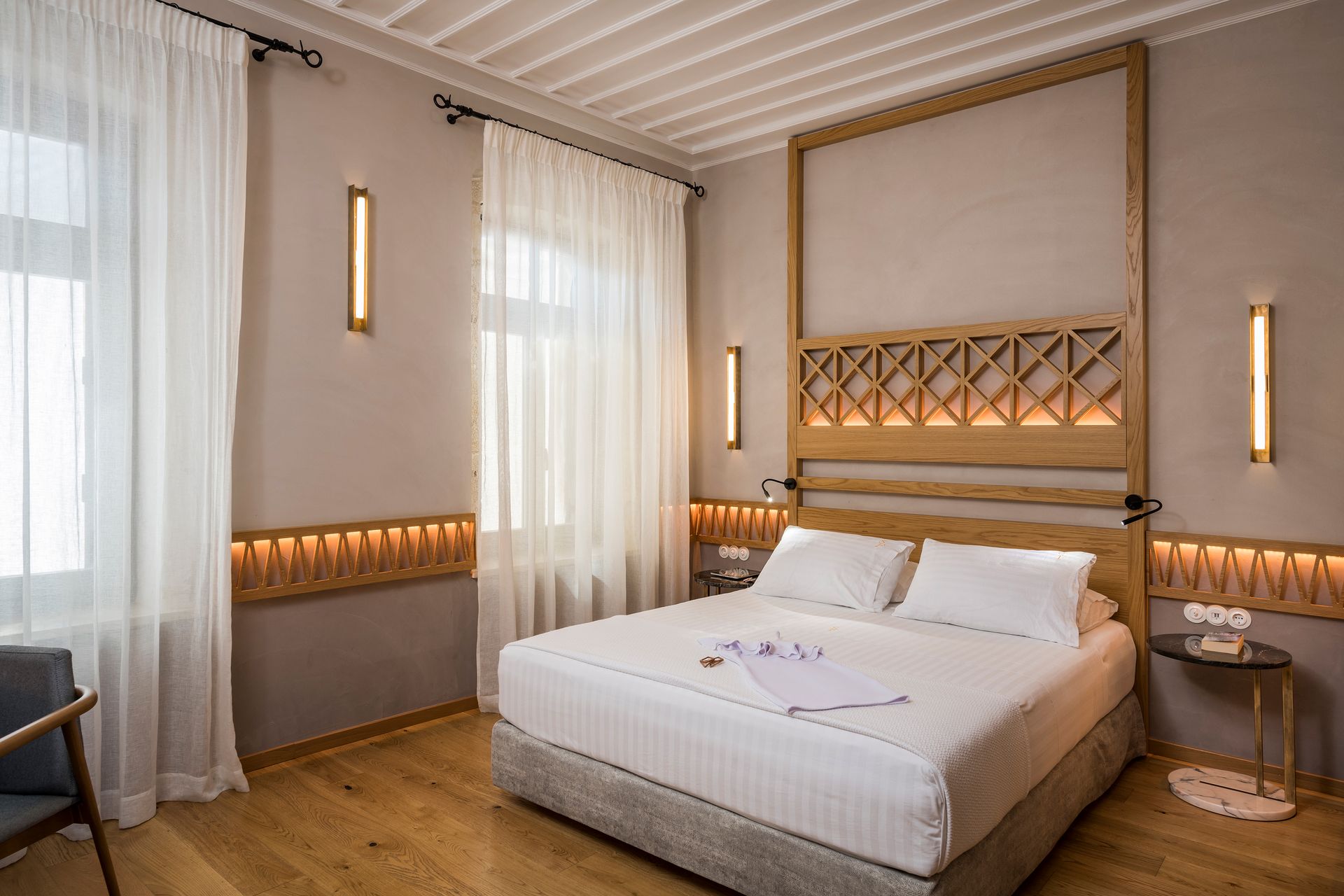 Highly aesthetic, modern design and discreet lighting cater for your needs and create an outstanding accommodation experience. The queen size bed fitted with a Cocomat mattress quenches your desire for ultimate soothing. Enjoy a refreshing shower, use the lavish toiletries we provide and offer yourself unique moments of wellness.
View Full Room Details 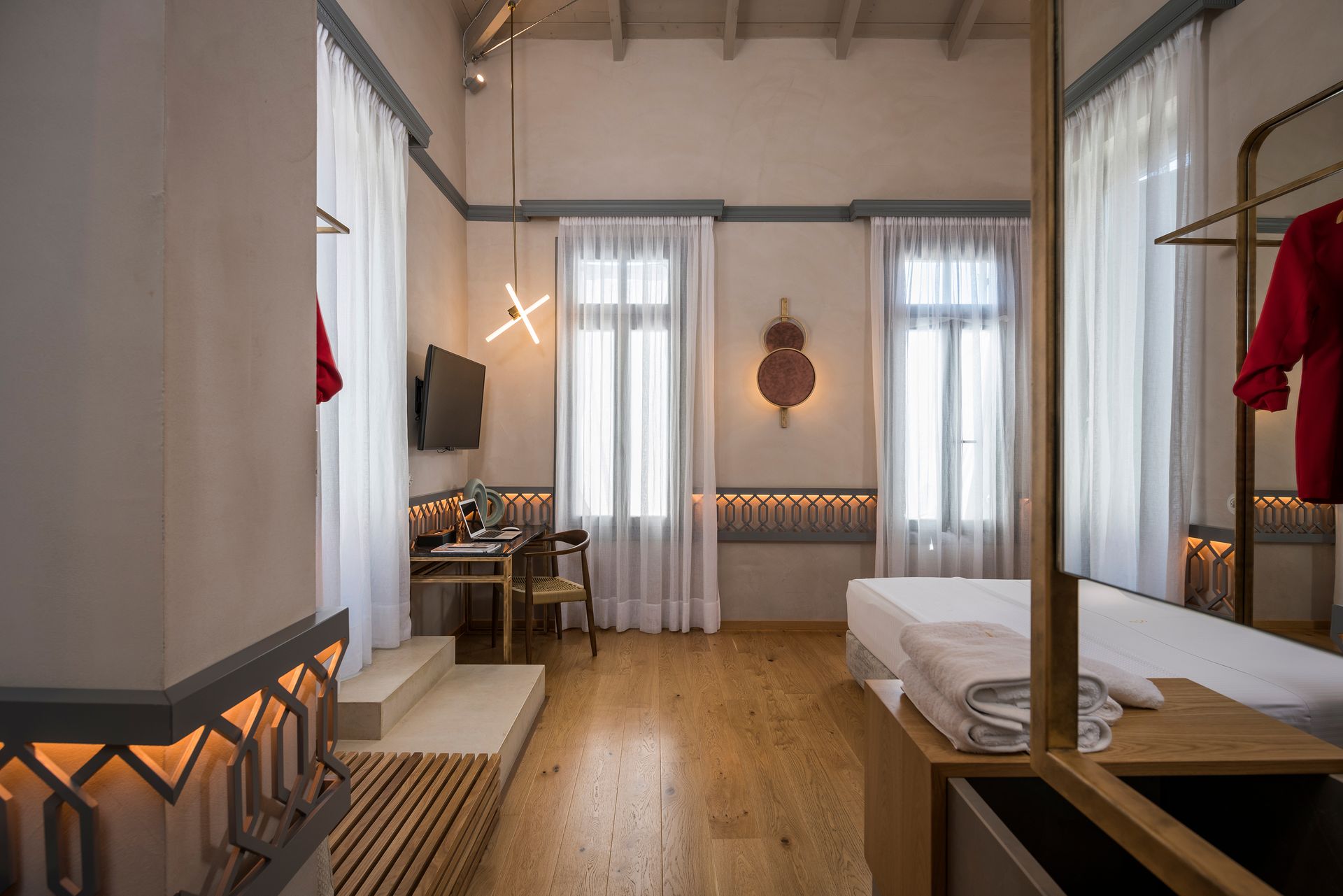 Subtle luxury and comfort are Deluxe Double Room’s main features; ready to offer you the most relaxing of moments. Marble dominates the bathroom surfaces; a sense of immeasurable luxury you will love. Toilet and shower are separate rooms, while bathroom mirror and washbasin combine in a single harmonious piece. Lie back on the ample terrace outside the room, read a book, relax and enjoy the generous view to the mountains. Upon request, the terrace may connect this room to the Presidential Suite, thus transforming the third floor into a single private space, isolating it from the rest of the hotel.
View Full Room Details 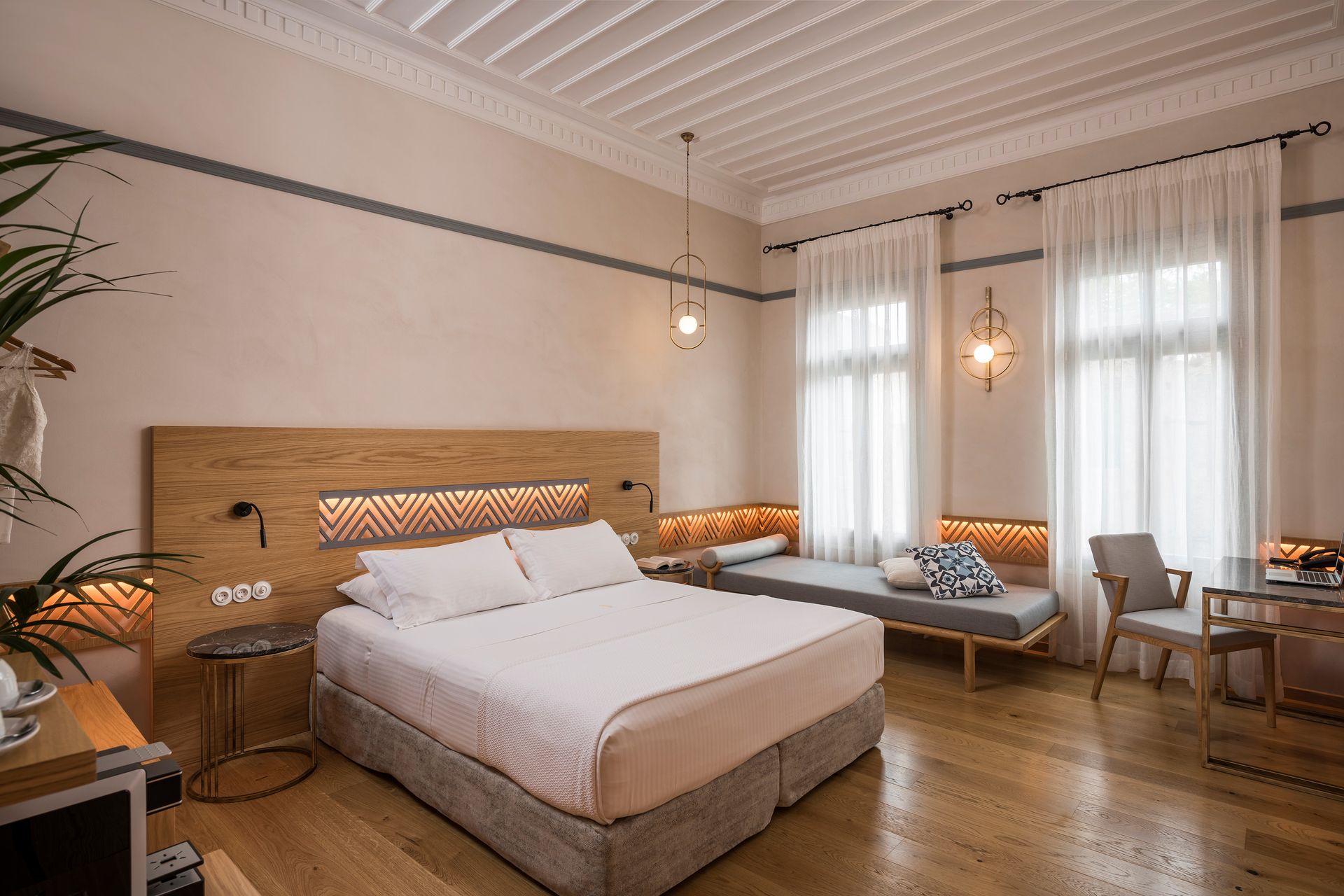 The elaborate decoration in the Junior Suite provides a sense of comfort and tranquillity. The suite overlooks the Old Town of Chania and features a comfortable bedroom and luxury bathroom with vanity mirror, ideal for the ladies. The hydromassage, the bathroom’s special tile work and the ample room will make you relax and feel right away at home. The suite features a queen-size bed with a Cocomat mattress to guarantee maximum comfort. Whether you share the room with your partner or your family and wish for more space, the suite can be combined either with the Classic Double Room or the Premium Sea View Suite in order to not only enjoy overlooking the Old City but also relish the majestic sea view. Upon request, you may choose to combine two or three rooms.
View Full Room Details 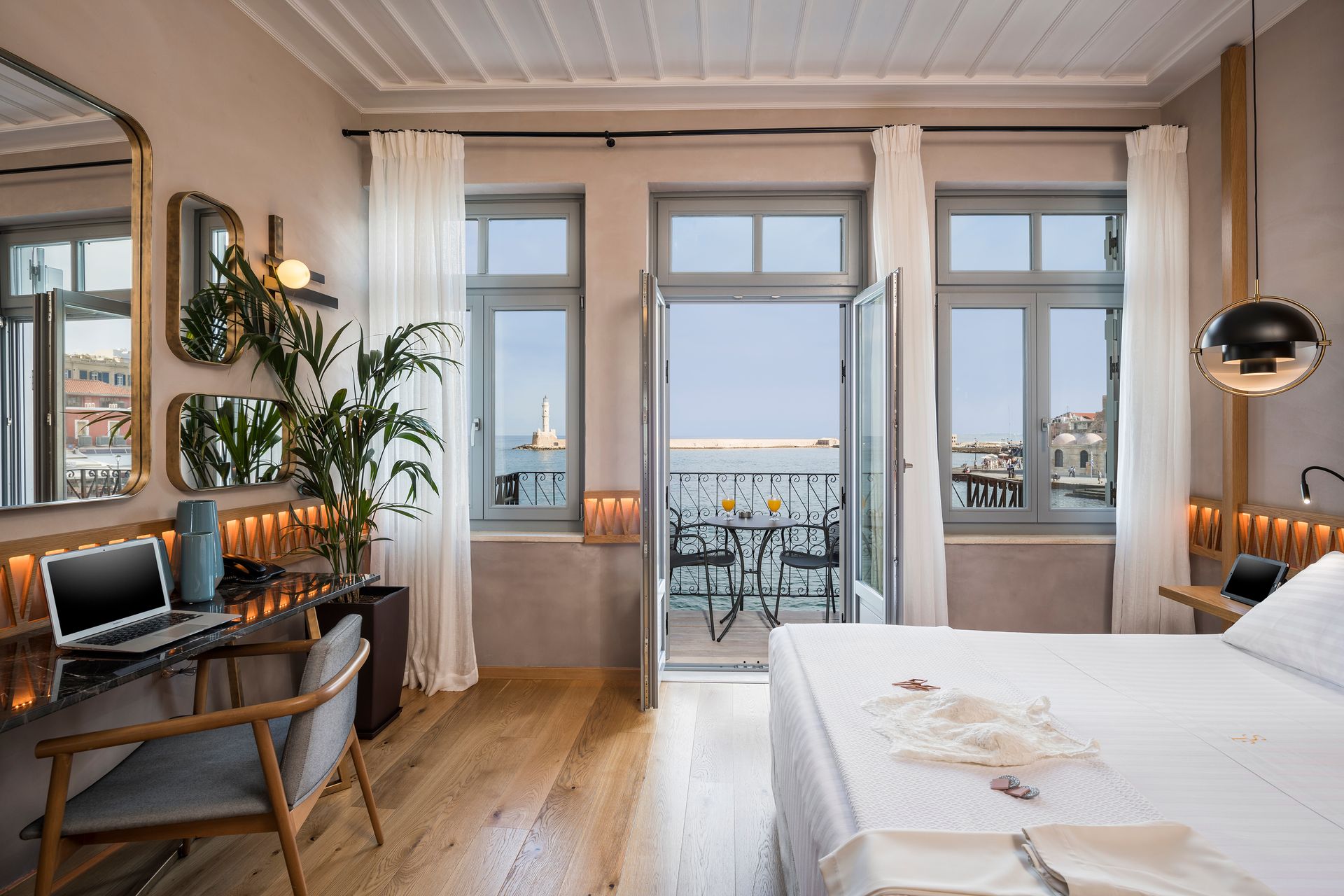 The Deluxe Double Sea View Room will surely be your personal retreat of peace and tranquillity, wishing to keep coming back to it every time you visit Chania. Its large balcony, with a view so enchanting, promises hours of relaxation as you gaze out to the sea and the Old Port Lighthouse, standing tall across from you. Marble surfaces, golden decor details, large mirrors and walk-in closet are some of the features that make this luxurious room a joy to stay in.
View Full Room Details 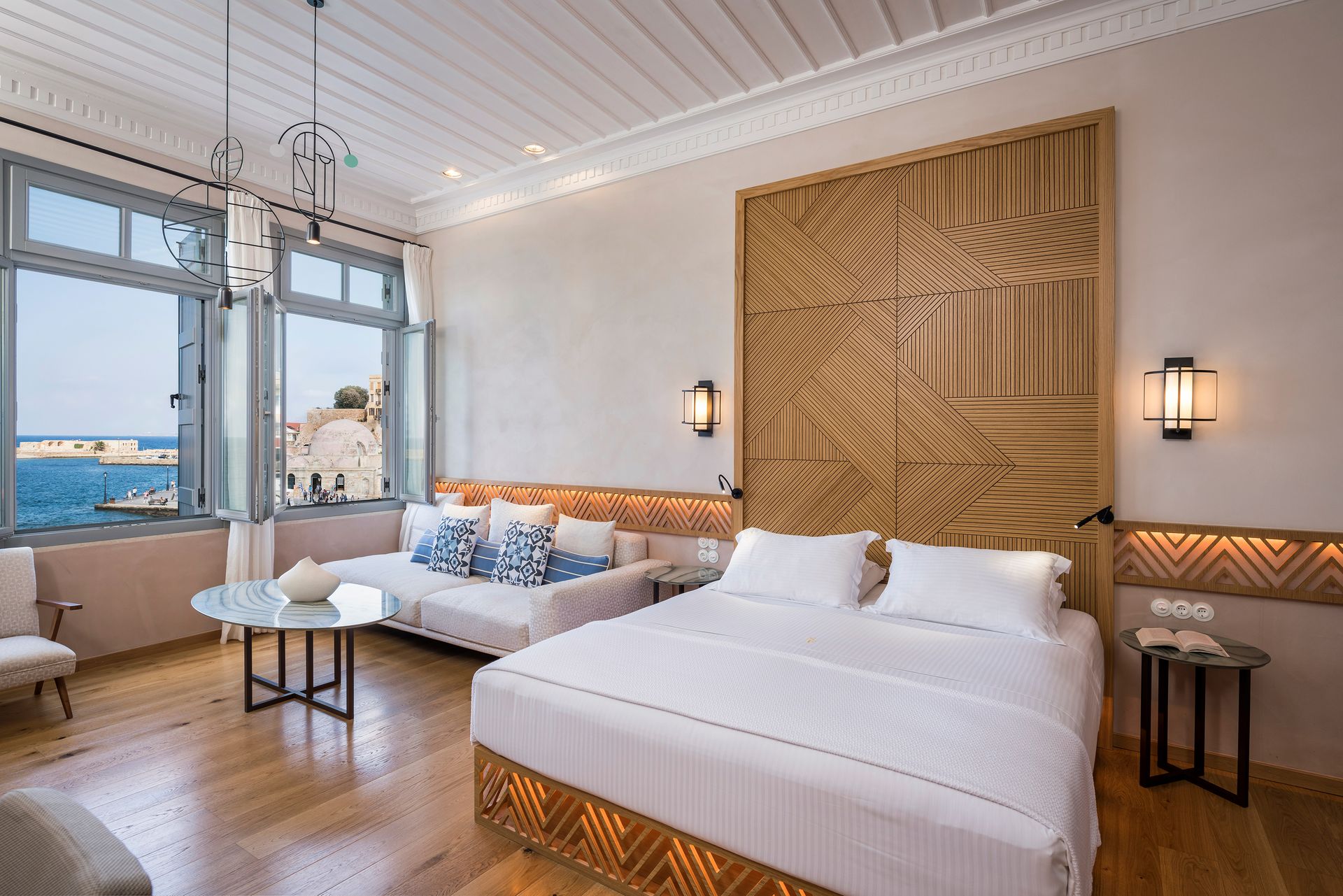 A Suite with an exquisite and dreamlike view, the Premium Sea View Suite, is located directly opposite the famous Old Port Lighthouse of Chania. Come morning and with the room’s windows wide open, lie back on the couch and enjoy an unforgettable view. Nothing better to ask for, without a doubt! Attention to detail, wonderful discreet lighting and the use of huge mirrors to visually maximise the space create a welcoming, friendly and luxurious environment ready to embrace your wishes. The comfortable king size bed will treat you to a smooth and snug sleep, while the spacious bathroom featuring two washbasins and a full-size mirror adds to the sense of luxury.
View Full Room Details 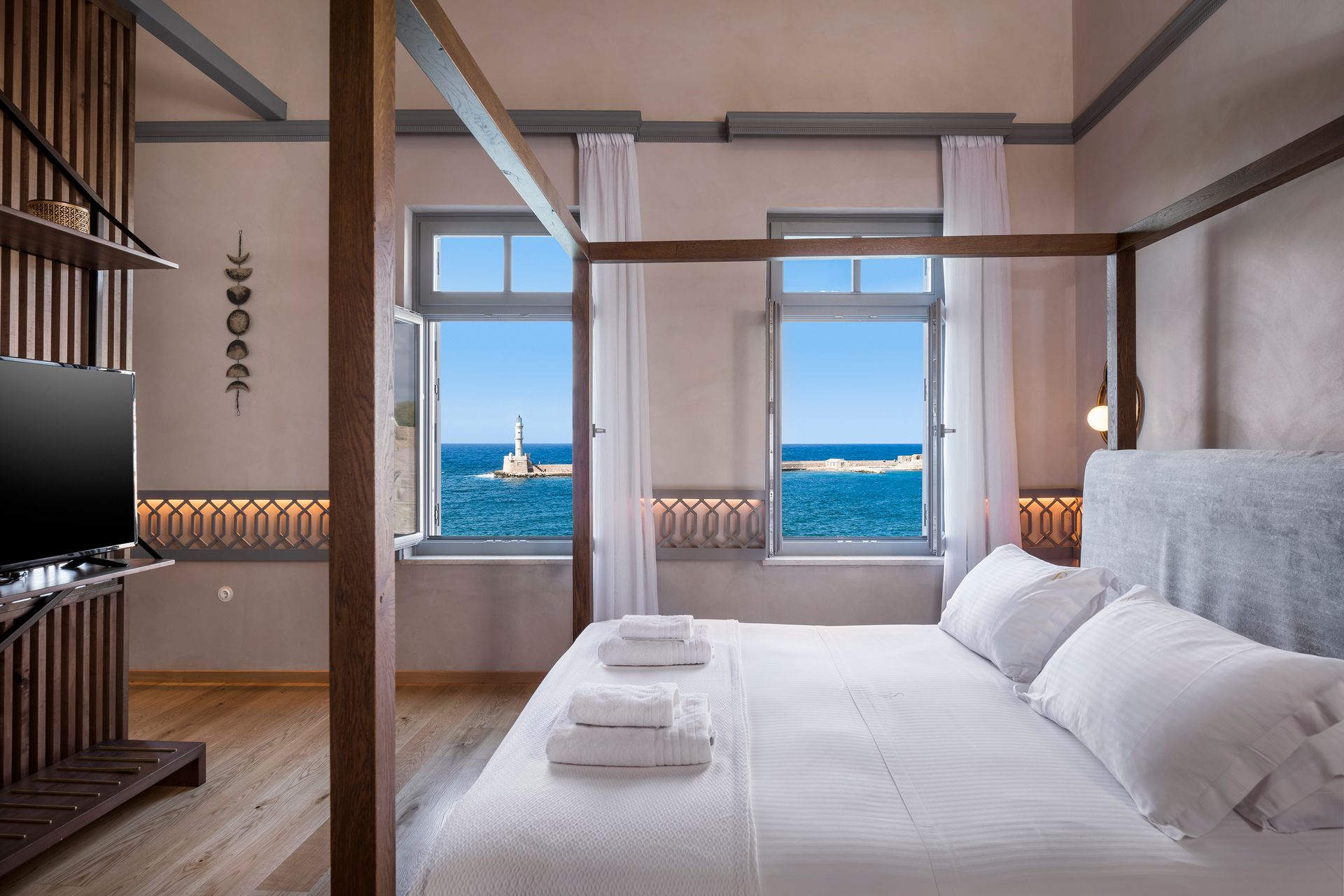 The Majestic suite is breath-taking; right from the moment you walk in, witness the modern decoration and particular layout of the room. The hydromassage at the open plan space is ideal for intimate, romantic moments with your partner. If you wish to combine a romantic holiday with work, there is a fully functional, in-suite, office space at your disposal for all your business needs. All elaborate decoration is delicately done by hand, while the high wooden ceiling is equally impressive. If you plan to spend a number of days and bring over your entire wardrobe, there is a large and spacious closet waiting for you. If you want to relax and breathe clean, fresh air, take a seat on the suite’s ample private terrace and marvel at the Cretan mountains.
View Full Room Details

Please Note : These details are a direct feed from the Property so they may include non grammatically correct English and be sparse in places. We will be updating and curating these details shortly

Greek Island Escapes is our dedicated programme for luxury and boutique travel to Greece and the Greek Islands. Discover Platinum, Gold and Silver rated properties to luxuriate in throughout the Eastern Mediterranean